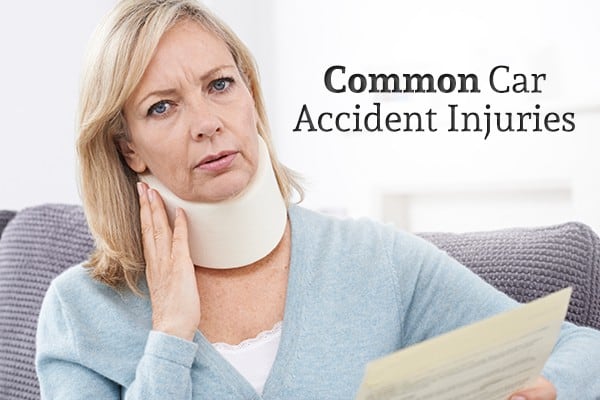 Every year, millions of Americans suffer severe injuries due to car crashes. According to the CDC, 3.9 million Americans visited the emergency room seeking auto accident injury treatment in 2010 and 2011. Hundreds of thousands were hospitalized. While car accidents can lead to a variety of injuries, the following are the most common:

Experts at the CDC report that car accidents are the third leading cause of traumatic brain injuries. These injuries often prove deadly, especially if not treated with haste. Re-injury is particularly dangerous.

Common symptoms of TBI include the following:

The severity of TBI can range significantly. Mild to moderate cases can be tough to diagnose, in part because the symptoms don’t always appear immediately. All, however, are dangerous, and all can impact the victim’s basic ability to function.

Forceful back-and-forth neck movements (such as those sustained during car crashes) often result in whiplash. Although multiple symptoms can accompany this condition, neck pain is easily the most common. While some victims recover quickly with help from medication, many suffer chronic pain and a variety of other complications.

Issues with the cushions (known as discs) between the vertebrae are commonly referred to as herniated discs. If the soft material within the disc pushes past the harder exterior, nerve irritation or compression can occur. This causes considerable pain for the sufferer.

The force of car crashes commonly causes discs — especially the bottom two of the lower back — to move out of place. These issues may go unnoticed at the time of the accident, only to cause considerable pain later.

Although typically associated with athletic injuries, anterior cruciate ligament (ACL) tears also regularly strike car accident victims. This injury may happen if a pivot or sudden change in direction occurs against a locked knee. Victims may experience a pop, followed by sudden and severe pain.

ACL injuries can be incredibly debilitating. The ACL provides the majority of the stability within the knee joint, so walking can be virtually impossible for those who suffer tears. Surgery is typically necessary and may cost thousands of dollars. In the meantime, victims are often unable to work or carry out other day-to-day functions.

A torn ACL is just one of several knee injuries that can result from car accidents. A torn meniscus is also common, especially if the knee is bent unusually or suffers a great deal of force.

The meniscus is a piece of cartilage that cushions the space between the thigh bone and shinbone. If it is torn, it can result in pain, swelling, and immobility. Typically, car crash victims with a torn meniscus find it difficult to fully extend the knee. Occasionally, rest and medication are sufficient for healing the injury, but many patients require surgery.

Seat belts save lives, but they can also lead to broken collarbones. The location of the collarbone between the breastbone and shoulder blade puts it in a prime place for snapping due to the force of the seatbelt during a car accident. While this is obviously preferable to being tossed from the car at high speeds, it’s still a painful injury that takes a long time to heal. The recovery period can be especially lengthy if the injury results in nerve damage or infection.

Shoulder injuries are very common among car accident victims. Often, injuries involve the rotator cuff (a group of tendons and muscles that surround the shoulder joint). The rotator cuff helps the shoulder maintain its full range of motion; if damaged, the victim’s arm movements may be severely restricted. While rotator cuff injuries often occur over time, they can also result from victims looking over their shoulder or tensing up their arms in the seconds preceding a collision.

From herniated discs to a torn ACL, a variety of devastating car crash injuries can occur due to negligence behind the wheel. These injuries can lead to years or sometimes even decades of severe suffering. The financial burden of hospital visits, rehabilitation, and loss of wages can also be tough to endure.

If you were recently involved in a vehicle collision, you deserve strong legal representation. The attorneys at Branch & Dhillon are here to help you recover damages. Reach out today to learn more about the personal injury process and how you can obtain both compensation and justice.