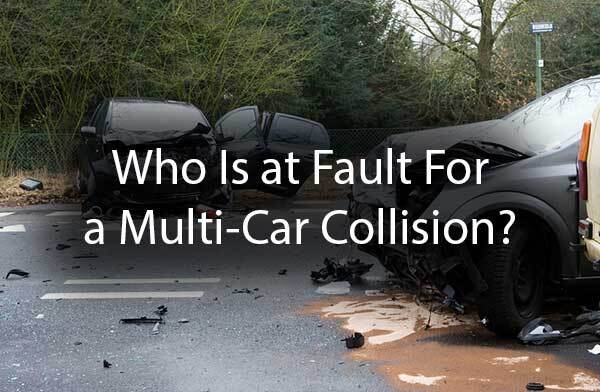 Driving home from work, Driver B notices that the car in front of her has come to a stop. Slowing down, Driver B is able to stop but she is closer to the car in front of them than the recommended two-car limit. Driver C, on her cell phone, didn’t notice Driver B stop and ends up running into Driver B who then is pushed forward into Driver A. Driver D, who was following Driver C too close, ends up colliding in the back of Driver C. All the drivers sustained injuries and are seeking compensation, but who is at fault for the multi-car collision?

Multi-car collisions, also known as “chain-reaction” collisions are difficult due to the varying circumstances that led up to the accident. Since there are more than two drivers, it may be difficult to figure out who is at fault or from whom to pursue compensation. Here is how fault is established in a multi-vehicle collision.

When an individual goes to file an insurance claim or a lawsuit against another driver, they need to be able to prove the liability of the other driver. This is often done by proving that the other driver acted negligently.

Investigators determining fault for the accident often consider whether one driver was driving too close or not following the law. When it comes to multi-car pile-ups, this can be difficult to pinpoint as there are multiple drivers involved. This is when investigators look to the actions leading up to the accident itself. For example, let’s revisit our previous scenario.

The Role of Negligence in the Accident

To figure out who is negligent in the multi-car collision, an investigator looks at what led up to the accident:

Driver A pulled up to the stoplight and stopped.

Driver B was able to stop safely but may have been following too close, not allowing for two car lengths between them.

Driver D was following too close and ended up colliding with Car C.

In this scenario here is how the investigators deemed who was at fault:

When it comes to multi-car collisions, there is no limit to how many drivers may be assigned fault. For example, if it turned out that Driver A was talking on the phone and slammed on his brakes last minute to avoid going through the intersection, then Driver A may be assigned fault as well, changing up the rest of the percentages.

Establishing the Order of the Impact

It’s not only the drivers’ testimonies that count towards finding fault within the drivers. Investigators, insurance companies, and lawyers will be turning to the following to find out the whole story behind the accident.

Texas is a comparative negligence state which means that the drivers are held liable for damages depending on their percentage of fault. Because of this, individuals must be under the 50% threshold to claim any losses from another driver. From the example before, Driver A, B, and D would be able to claim compensation, but Driver C would not.

If you have been injured in an accident, it may feel like your whole world has screeched to a halt. The dedicated attorneys at Branch & Dhillon can help you claim the compensation you deserve by holding the liable party accountable. Contact our team today to schedule a free no-obligation consultation or for more information on our services!