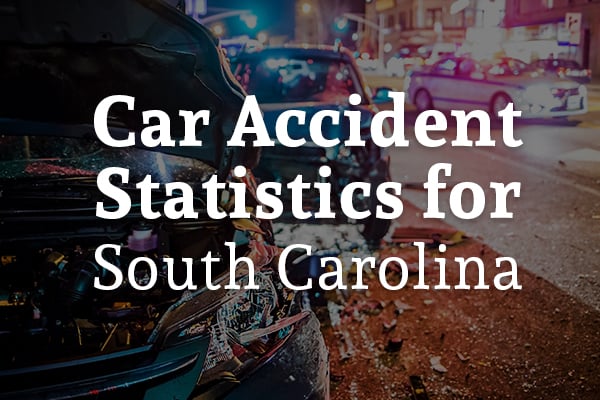 Car accidents are traumatic events that happen every day in the United States. From major damage to the vehicles involved to serious injuries and possibly death, these accidents create a lot of destruction. Most of the negative effects of car accidents take years to fully recover from. The National Highway Traffic Safety Administration reported that there were nearly 1,000 people killed in traffic accidents in South Carolina in 2017 alone. This is nearly double the national standard and concludes to a fatality rate of twenty accidents per 100,000 people. Here are the car accident statistics for South Carolina in 2017:

Seatbelts are extremely important for the protection of the driver and the passengers of the vehicle. It protects one from getting thrown from the car in the case of an accident. In 2017, South Carolina reported that 306 fatalities occurred due to the passenger or the driver of the car not wearing their seatbelts.

The below statistics from the National Highway and Safety Administration are sectioned under the three major causes of accidents: Driving under the influence, Speeding, and Distracted Driving. These statistics are being shared in hopes to spark action against these common causes of vehicle crashes and reduce the number of accidents on the road.

Driving Under the Influence

Driving under the influence, whether from drugs or alcohol, resulted in 313 fatal accidents in South Carolina. This is ⅓ of all traffic-related deaths in the state.

Speeding, either from the result of a collision by running through a red-light or from rear-ending someone, resulted in ⅓ of all traffic-related deaths in South Carolina in 2017. A total of 361 people were killed due to an accident caused by the speeding of at least one of the drivers involved in the crash.

Distracted driving, whether from texting, eating food, or correcting a child in the back seat, killed 3,450 people in the year of 2017. Another 391,000 people were injured from accidents resulting from one or more of the drivers’ distracted driving. Distracted driving laws are being more regularly enforced in the states, as cell phone use in the car is now either restricted or completely banned.

If you or a loved one has been injured in an accident due to the negligence of another driver, you shouldn’t have to face the recovery process alone. Contact the dedicated personal injury attorneys at Branch & Dhillon, P.C. to get started on the road to claiming the compensation you deserve. Our law firm is a no-win, no-fee law firm, meaning that we remove the risk of seeking compensation. Call Branch & Dhillon today for a free consultation.